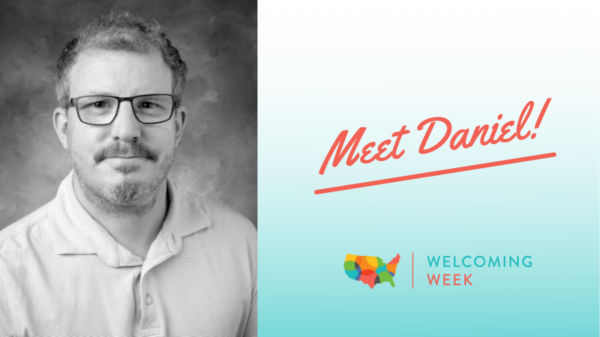 Background: My mother’s family is from the Black Forest close to the French border. My father’s side is from Thuringia in the former GDR ( East Germany). I grew up in the Black Forest 1 hour east of the French border. I participated in a high school exchange program with the Alexandria Monroe High School in Indiana. I later studied at the University of Constance at the Swiss border. I spent one year at the University of Massachusetts Dartmouth in a German/ American student exchange program and focused on marine biology.

How I got to Iowa City: I applied for a postdoctoral position at the University of Iowa to learn new technologies, which led me to Iowa City. I was offered a position for cancer research and in addition started to volunteer for the Leukemia and Lymphoma Society (LLS). I met my wife in 2015, who shares my cultural values and loves to support the community out of her Iowa City salon Groovy Katz. She has two daughters Chloe and Sophia. We have a son Felix who is 2 years old. All three of them were welcomed to Germany during a short visit already.

Why you decided to participate in the Welcoming Banner project:  The welcome banner project sees its mission in connecting cultures, build upon experiences and cultural learning, and promotes change to optimize the cultural experience. I was part of this process in my home country, and it made it a better place to live. I was lucky to be part of a generation that focuses on transmitting values that shaped Germany and the principalities before its existence for centuries: culture, science, creativity, hospitality, and friendship to its neighbors and beyond. I resided in an international dorm at the University of Konstanz and had a fantastic experience. Cultural diversity enhances communities and broadens horizons. Opening to diversity is an opportunity. The United States proved that it is possible to have a country built by different cultures. Welcoming more cultures to Iowa City will make its citizen richer.